Adults and children alike enjoy Halloween.  It’s a time of year to celebrate imagination, creativity…and beer.  (But when is a bad time to celebrate good beer?)  House and work parties are overrated.  House parties get hot, and crowded and the chances of them having decent beer are pretty low.  Work parties force us to have a PC costume and the chances of them offering really good beer is slim to none…unless…you work at a brewery.   So why not throw a halloween party at your brewery for your customers? 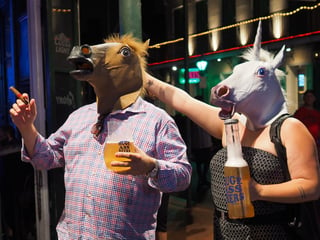 But with less than 30 days from the spookiest day of the year, now is the time to plan a halloween party at a brewery!  Jump on it.  People are already making their plans!  So where do we start?
Your website - post it on the homepage asap.
Fliers - make them and hang them around the brewery.  You may also want to hang a few at local halloween costume shops spread the word!!
Social media - speaking of spread the word, get the event up on Facebook , Twitter, and Instagram.
Have the bartenders talk about to it everyone that comes in between now and then.
Make the party a success:
- Definitely have a contest for best costume.  This will encourage creativity
- If you have one ready around that date, use the party to debut a new beer or release a seasonal beer.
- Give a discount on growlers on cans for attendees only (free growlers with a new fill, for example)
- Hold a beer pong tournament that night.  Who can say no to dressing up like the plant from Little Shop of Horrors and playing beer pong with friends or, even better, strangers.
- Invite a musician or DJ to play that night
- Invite a food truck to park outside the entrance to the taproom
- Make it an animal friendly night.  Offer free dogwood and dog toys for anyone who brings in their best friend
- Encourage bartenders to dress up that night as well
- Hire a Photo Booth to come to the taproom so everyone can have proof of how ridiculous they looked that night.
- provide a small gift to everyone who came (a paper coaster, for example)
- make it kid friendly
When you plan a halloween party at a brewery, make sure to stay creative, get the word out quickly, and stay ahead of customers' planning for this creepy night at the end of October.